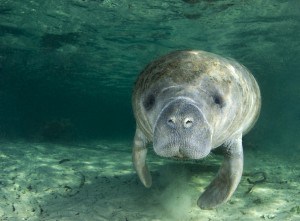 Oceans in general have such an abundance of creatures that many have yet to even be discovered. In the depths of many oceans, animals swim and live in total darkness and never see a single person. In areas where people are plentiful, marine life and humans swim together. Most times this coexistence is peaceful; with each being staying out of the others’ way.

In Florida, marine life around the coast and inside its many waterways is plentiful. There are tiny sea creatures like shrimp, and very large sea mammals like the manatee. Some animals, like the sea turtle, have been around Florida’s coast for hundreds of thousands of years. Others, like the lionfish, are not native to Florida and have a negative impact on its other native species and environment.

Here are some of the more common marine life that inhabit Florida’s waterways:

There are many different types of jellyfish that live in the ocean around Florida. Some are harmless, like the comb jelly (which is not truly a jellyfish at all), and do not sting at all. Others, like the sea nettle, have a moderate sting and often leave behind sensitive red marks on the skin. Because many jellyfish do not actually swim, but move in the ocean with the current, it is often recommended to stay out of the water at beaches when the waves are large. During these high-motion, wavy times there can be hundreds of jellyfish in the water all at once.

The bottlenose dolphin is the most common species found in Florida waters. They live in groups of 10-100, depending on how close to the shore they spend their time. They often switch and move to different groups throughout their lives, and can live up into their 50s. Dolphins are extremely smart sea mammals. They often fish as a group, and have even been known to take care of other injured group members.

The word “manatee” actually means “sea cow” which is very fitting for this large, slow moving marine mammal. Growing upwards of 10-12 feet long, and weighing in at around 1000 pounds, the manatee spends its day slowly swimming through Florida’s coastal waters and rivers. Like a cow, manatees eat grass. But unlike a cow, they eat the grass and other plants underwater. Boats have to be extra careful of manatees while traveling through Florida’s waterways. Not only are they extremely slow moving and have a hard time getting out of the way, but manatees also spend a few hours every day resting suspended at the water’s surface.

The loggerhead turtle is the most common sea turtle in Florida. It is named for its block-shaped head, and one of the larger species of sea turtles in the world. Other species include the green turtle, leatherback turtle, hawksbill turtle, and Kemp’s Ridley turtle. A fact that many people do not know is that all sea turtles have tails, with the males’ being longer than the females’.

Lionfish are a non-native species that came from the waters of the Pacific and Indian oceans. Although it is not known when Lionfish were released into areas of water around Florida, they were first seen in 1985. Since then they have spread rapidly, now occupying areas all over the Atlantic and Gulf of Mexico. The Florida Fish and Wildlife Conservation Commission encourages people to remove lionfish from Florida waters when they can. Because lionfish eat other fish, they have reduced some native fish populations, which in turn effects the local reefs.

There are many, many more species of marine life that inhabit Florida’s waters. At Camp Live Oaks Ocean Camp, your child can learn about the animals we mentioned above, and plenty more. Teaching children not only about marine life, but also how to live in harmony with them is an invaluable lesson. Creating a peaceful, thoughtful, and appreciative harmony between people and all wildlife is important. But it can be even more so when it comes to coastal and highly traveled waterways such as those in and around Florida.