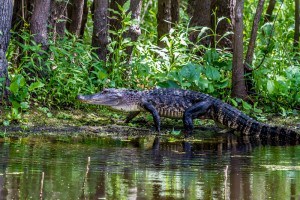 Florida’s official state reptile was named the American alligator back in 1987. Yet long before official recognition, giant alligators ran the untamed swamps of Florida. In fact, in our state alone there is an estimated 1.2 million alligators!

Kids are naturally intrigued by the giant, monster-like qualities of the American alligator. The alligator isn’t only a marvel to look at, but this species plays an important role in maintaining Florida’s wetlands. Get your kids excited about learning with these 14 fun facts about our state reptile.

2. When hungry, alligators indulge on turtles, fish, and other similar animals. Alligators might be big and strong but they are kind of lazy, and prefer to go after smaller prey that is easier to catch and quickly consume. The biggest alligators of the swamp hunt deer and other large mammals, and their stomachs are known to withstand prey the size of Florida panthers and black bears. Alligators also eat nutria and muskrat, which are known to cause extensive damage to wetlands in habitats where their population is left unchecked.

3. Dinosaurs and alligators are cousins! Each species descends from the same common ancestor dating back 200 million years.

4. When kept in captivity, alligators are known to live an incredible length of time. To date, the oldest alligator is 76-years old and lives at a Siberian zoo.

5. Right around the time you are celebrating the Fourth of July female alligators are busy laying their eggs along swampy shores. Generally, alligators lay around 30-50 eggs at a time in plush nests. A short 2-months later baby alligators will hatch, fully developed and already 8-inches long.

6. Since alligators are cold blooded, they are commonly seen sunning atop rocks. Sometimes they lay out with their mouths held open, this is not a sign of aggression but instead is a natural tactic to help regulate body temperature.

8. Alligators are very dangerous because they are known to travel at quick speeds, can swing their massive tail, and have strong jaws with razor sharp teeth!

9. At one point American alligators were considered an endangered species but thanks to a major decrease in illegal hide hunters the population has been able to reproduce to normal numbers.  The Florida Game and Fresh Water Fish Commission is responsible for protecting local alligators, as well as all other animal habitats within Florida’s wetlands (Learn more).

10. Alligators have about 80 sharp teeth in their mouth. They have a very efficient way to keep up with dental health, when one tooth falls out they simply grow a new one in its place! The average alligator has about 2,000 to 3,000 different teeth throughout their life. Despite having great teeth, alligators do not even chew. Instead, they use their massive teeth to bite off chunks of prey before swallowing food whole.

11. An alligator can remain underwater for 2+ hours without coming up for air.

12. Adult male alligators tend to lead solitary lives, they spend most of their time hunting and hanging out alone. Still, alligators do work in teams. The largest alligators are often in charge of looking out and protecting a specific territory from predators.

13. People often assume alligators don’t have predators, and while they don’t have many they are made into a meal now and again. Wild pigs and eagles will swoop in for a small alligator. Jaguars and leopards can take down bigger alligators, and some pythons and anacondas are known to attack and eat alligators as well (learn more here).

Alligators are incredible creatures but they can still be dangerous. The greatest danger is if you enter their habitat and they feel threatened. Females guarding eggs are especially violent and will lash out to protect her future babies. Thankfully you’ll never find an alligator out hunting human flesh. Instead they are afraid of humans and will work to avoid you if possible. This is why you should never feed alligators, because this takes away their natural fear of humans and puts everyone in potential danger. It is also against Florida State law to feed alligators.

At Camp Live Oak kids learn all about Florida’s native species, including the famous alligator.