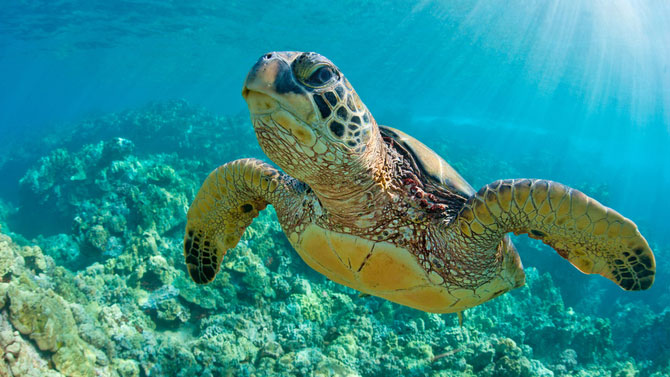 At Camp Live Oak, we regularly host guest speakers to educate campers about sea turtles and ongoing rescue efforts. The following fun facts for kids about Florida’s sea turtles are sure to get your child even more excited about this fascinating species. Living in Florida offers the unique experience to learn firsthand about sea turtles, after all our state is home to 5 unique species.

Sea turtles have lived on Earth for over 100 million years, that means sea turtles have been here way longer than humans. In fact, they existed back when dinosaurs roamed the land. To this day, nearly every beach in the world is home to some types of sea turtles.

2. Sea turtles live in the ocean but need air to breathe.

Sea turtles live in both tropical and subtropical climates and reside within almost every ocean basin in the world. While they live in the ocean and are well adapted to life at sea, unlike fish, sea turtles need air to breathe.

3. There are five species of sea turtles currently living in Florida.

The five types of sea turtles living in Florida include the massive leatherback, hawksbill, loggerhead, Kemp’s ridley, and the green turtle.

The loggerhead is the most common species found in our state. It gets its name because of its huge block-like head. The average adult weighs in at around 275 pounds and has a 3-foot shell.

The green turtle gets its name because of its brilliant green body fat. The average green turtle weighs 350 pounds and has a much smaller head in comparison to the rest of its body. They typically measure around 3.5 feet long.

The leatherback turtle is one of the more unique sea turtles. It is also the largest species and can grow up to 6 feet long and weigh between 500 to 1,500 pounds. The largest leatherback on record weighed an incredible 2,000 pounds. This type of turtle does not look like the classic sea turtle, instead it is covered in a leathery skin.  This interesting species is known to travel as much as 3,000 miles from their nesting beach.

Kemp’s ridley is the rarest sea turtle as well as the most endangered. They only nest on one beach in the world and that’s off the Gulf Cost of Mexico in an area known as Rancho Nuevo. There are less than 1,000 nesting females in the world. This is the smallest sea turtle, weighing in at around 85 to 100 pounds and growing between 2 and 2.5 feet in length.

The Hawksbill is another small sea turtle weighing in at around 100 to 200 pounds and measuring just 30 inches on average. These tropical sea turtles are commonly found in lagoons, estuaries, reefs and bays. There are a few documented hawksbill nests in the Florida Keys.

4. Sea turtles are an endangered species.

6 of the seven sea turtle species are considered endangered. Turtles face many dangers in the great big ocean, including fishing nets, loss of habitat due to coastal development, and ocean pollution—largely plastic.

All it takes is a bright light on a building to distract freshly hatched sea turtles, causing them to go the wrong way, away from the ocean. Sea turtles that do make it to the ocean after hatching travel great distances in search of food, sometimes traveling across entire oceans. All of this traveling increases their risk.

It’s very easy for a sea turtle to mistake a plastic bag for a jellyfish. Plastic and other pollutants cause a shocking number of marine life causalities every day. You can help reduce sea turtle deaths by using less plastic, recycling, and never throwing plastic or other garbage on roadways where it has a high chance of ending up in the ocean. If you see trash on the beach, clean it up—you could save a life in the process.

Different species of sea turtles have different diets. Leatherbacks feast on jellyfish and other soft-bodied animals, while loggerheads consume heavy-shelled animals like clams and crabs. Kemp’s also enjoy crabs, while hawksbills dine on sponges and other invertebrates.

6. A baby turtle is called a “hatchling.”

Every two to five years, female turtles come on shore to lay eggs a few times per season. After they lay their eggs, it takes around 60 days for baby sea turtles to emerge from their sandy nests and make their way to the ocean. Young turtles spend the first few years of life free floating in the ocean before moving to protected bays or nearshore waters.