7 Interesting Facts About the Florida Everglades for Kids

HomeBlogBlog7 Interesting Facts About the Florida... 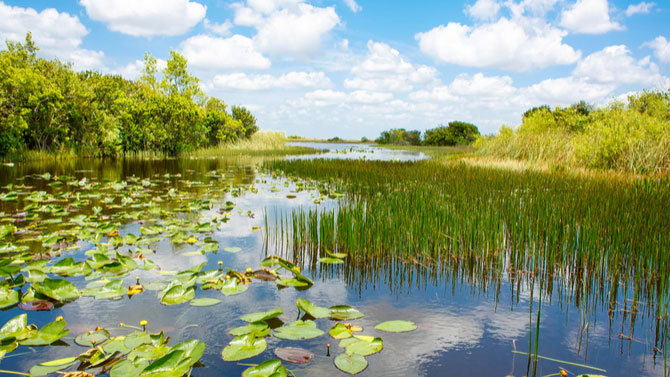 Our campers love going on air boat rides in the Florida Everglades as one of our many field trip opportunities. Air boats offer a super fun way to glide across the water, and the Everglades has so much to show off—after all, it’s home to one of the world’s most unique collection of eco systems. There are plenty of good reasons why it’s a World Heritage Site, a Biosphere Reserve, a Wetland of International Significance, and an Outstanding Florida Water.

#1. The Everglades is a huge river.

The Everglades is a river with water flowing in from north and south Lake Okeechobee. In total, the river measures over 60 miles wide and a 100 miles long. According to the National Park Service, it is the largest continuous stand of sawgrass prairie in North America, the largest designated wilderness in the eastern US, as well as the largest mangrove ecosystem in the western hemisphere.

The “River of Grass” defines the wetlands surrounding the river that provides a lush eco system to many animals. The River of Grass used to be as much as 50% larger, once measuring 4,000 square miles, but its size has been reduced due to construction and related drainage projects.

1 in 3 Floridians get their drinking water from the Everglades.

#3. There are 9 different habitats found throughout the Everglades.

There are 9 distinct habitats found throughout the Everglades. The variety found here is unlike anywhere else in the states. Some of the larger habitats include:

#4. It’s the only place in the world where both alligators and crocodiles coexist.

There are over 1.5 million alligators in all of Florida, and over 200,000 of them live in the Everglades. Crocodiles congregate in small numbers around coastal portions of the Everglades, while local alligators prefer to stay inland where the freshwater is. While they don’t regularly cross paths, it’s the only place in the world where they live in the same region.

Crocodiles and alligators belong to a group of reptiles known as crocodilians—aka the largest living reptiles. Luckily, the American crocodile tends to be smaller and less aggressive than other species. Even still, the average alligator is 68% muscle—so stay back if you see one!

#5. There are a lot of birds in the Everglades.

Welcome to North America’s most active breeding ground for tropical wading birds. You’re sure to see some beautiful birds out here, such as a stork, great white heron, snowy egret, little blue heron, reddish egret, glossy ibis, or a colorful roseate spoonbill—just to name a few.

There are many other types of birds too. In fact, over 360 different species of birds have been spotted in Everglades National Park. This is clearly a popular spot for bird enthusiasts. Many birds in the area are protected under the Endangered Species Act, including the red-cockaded woodpecker, piping plover, bald eagle, roseate tern, Cape Sable seaside sparrow, wood stork, and the Everglades snail kite.

#6. It’s the only subtropical preserve on the North American continent

The Everglades is the only subtropical preserve on our entire continent. It contains both temperate and tropical plant life, as well as marine and estuarine environments. The unique diversity found here provides an ideal home to so many different species. People from all over the world visit the Everglades to witness the jaw-dropping beauty that exists here.

Parts of the Everglades are only a few feet deep, but the deepest portions drop as much as 9 feet below the surface. The average depth is 4 to 5 feet. Not that you should go for a swim, your best bet is stay within the safe confines of an airboat.