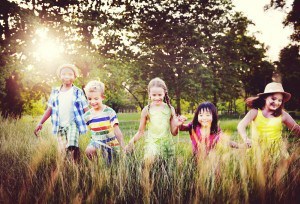 It’s no secret that it can be incredibly difficult to get children to spend time outside nowadays — with tons of video games, television shows, and the endless Internet at their disposal — but we’ve found scientific data that shows several benefits of outdoor play and being in nature. Besides making us happier, playing outdoors is a great way to get exercise, improve sleep, and more. Keep reading to learn about all of the benefits your child can reap from being outside.

When your child plays and spends time outdoors, he or she will enjoy the following benefits:

Data collected by researchers who work for the Journal of Optometry and Vision Science reported that children who spend time outdoors on a regular basis benefit from improved vision. The study showed that children who had spent time outdoors every day had better distance vision than those who spend little to no time outside. The study showed that spending time away from a screen can help prevent Computer Vision Syndrome, which is a result of being in front of a screen for extended periods of time. The study also showed that being outside can prevent children from complications surrounding nearsightedness that’s linked to the artificial light from computer screens. Researchers found that children who spend at least two hours of outdoor play each day are four times less likely to be nearsighted.

Numerous studies throughout the years have shown that children who spend time outside every day have better attention spans than children who do not. Being outside will also allow children to be more curious about the environment around them.

This benefit is a no-brainer: if you child is surrounded by other children when he or she is outside, he or she will have stronger social skills. Being social allows children to learn critical lifelong behavioral skills, such as learning how to work well with others.

The American Academy of Pediatrics recently reported that many children suffer from vitamin D deficiencies nowadays — even though it’s a critical vitamin to have. Vitamin D can help children from developing bone problems, and sufficient vitamin D can even help kids and adults prevent diabetes and heart disease.

Children might not have the kind of stress adults have — they don’t have many responsibilities, after all — but many studies have shown that children can and do suffer from stress all the same. Thankfully, spending time outside — and especially being exposed to nature — allows both children and adults to have decreased stress levels. The combined efforts of exercising regularly and being around the foliage while outside will help children maintain a healthy weight, improve mood, boost energy levels, have fun, and offer relief from negative thoughts. There are a ton of other benefits to regular exercise that we could list here, but we’re sure you get the idea.

The Nippon Medical School conducted a study which found that children as well as adults who spent six hours outdoors — specifically, in the woods — for two days exhibited an increase in their white blood cell count. In case you don’t remember what white blood cells are from health class, they’re the vital cells that help us fight viruses and infectious diseases. The study showed that the boost in the cell counts lasted at least seven days after spending the time in the woods.

Do you have a child who struggles with falling asleep at night? Well, we’re here to tell you that there is hope! Numerous studies have shown that both children and adults who exercise regularly (or who play regularly) benefit from improved sleep. If your child spends at least 150 minutes of time playing outdoors per week, your child will be able to fall asleep faster and stay asleep longer. In contrast, poor sleep has been contributed to not enough exercise and not spending enough time outdoors. When people don’t spend enough time outside, they don’t get enough natural light — and natural light is needed to maintain a regular sleep schedule.

In addition to all of these great benefits, children who spend time playing and learning outside will benefit from clean air, and will have experiences and memories that will last them a lifetime.