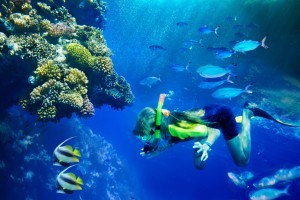 Snorkeling at Dr. Von D. Mizell-Eula Johnson State Park offers so many exciting underwater sights, including coral reefs, colorful fish and so much more! One of our campers’ favorite activities is snorkeling, and most trips end with some really awesome stories. Snorkeling gives kids the opportunity to see sea creatures up close and personal in their natural habitat.

Dr. Von D. Mizell-Eula Johnson State Park is one of Florida’s most treasured parks with miles of beachfront beauty to offer. You can fish, swim, bike, dive, boat and even snorkel here. If you go snorkeling you are sure to see some of these amazing underwater creatures.

Florida is one of the only states in the U.S. with extensive shallow coral reef formations. This gives kids with little snorkeling experience the opportunity to snorkel in shallow, safe waters while still seeing some pretty incredible sights. Coral reefs are classified as an animal species, although plants that are microscopic live within the animal tissues, creating a unique symbiotic relationship between plants and animals. The plants benefit from the animal waste and are protected by the animals. The animals benefit from the plants because they provide sugars and oxygen. All of the tiny plants found throughout a reef give coral a lot of its vibrant natural coloring.

In order for coral reefs to flourish it takes a very specific type of environment, which just happens to exist off Florida’s coast. In fact, the Florida reef tract includes over 45 species of stony coral and 37 species of octocorals. The sights that are living just beneath the water’s surface are sure to intrigue. Seeing a massive coral reef up close in person is exciting for both kids and adults. (Refernece)

Along with coral reefs there are plenty of fish to see beneath the blue ocean waters, like the triggerfish. Triggerfish are bright and beautiful fish related to the family Balistidae. These fish prefer tropical and subtropical environments and are well known for their bright lines and spots.

Angelfish are pretty little sea creatures that come in many different colors and patterns.

Grouper fish can be HUGE but there are also relatively normal sized grouper fish as well. These fast-swimming fish are built with a stout body and a big mouth they use to swallow prey whole instead of chewing. This works especially well for them because they don’t have very many teeth. (Reference)

Kids love starfish and it’s easy to see why, they are such awesome creatures! There are a number of common sea stars found along Florida’s coast. No one will be taking them home though, lucky for starfish they are protected by Florida’s Fish and Wildlife Conservation Commission’s marine life species regulations.

There are also plenty of sand dollars, urchins, sea lilies and sea cucumbers to check out as well. (Reference)

Amberjack fish are native to the Atlantic and Pacific oceans and belong to the Carangidae family. There are different types of Amerberjack, ranging to include a variety of physical appearances and color patterns. (Reference)

Mutton snapper fish are a frequent sighting in Florida’s waters. These fish range to include shades of blue, olive green and even tints of red. You can identify this breed of fish by the V-shaped tooth patch located on the roof of their mouth. An easier way to pinpoint this fish is to take note of the bright blue line that runs right under their eye. These fish vary in size but can grow fairly large. The largest Mutton Snapper ever caught and recorded was 30 pounds and 4 oz. (Reference)

A World Of Wildlife For You To Explore At Dr. Von D. Mizell-Eula Johnson State Park

While you are at Dr. Von D. Mizell-Eula Johnson State Park there is plenty of other wildlife to check out above sea level. One of the popular on site attractions is the manatee sanctuary that allows you to see these adorably plump creatures up close. Manatees are huge without any sign of a neck or waist.

This is also the best park to see turtle hatchings, as over 10,000 baby turtles hatch along these shores every year. If it is nesting season, park rangers will offer tours and special educational programs where kids can learn more about turtles, also known as small ancient dinosaurs.

Camp Live Oak works in conjunction with the Florida State Park System to provide campers with a uniquely valuable experience. One of our campers’ favorite activities is snorkeling, which we often combine with science experiments, underwater photography and more.