The History of Surfing 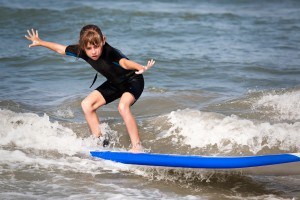 One activity here at Camp Live Oak that many other camps around the country don’t do, or are simply unable to do, is surf. We are fortunate enough to be in a great location where beaches abound, and our campers are able to ride the waves mostly year-round. Historically speaking, people have been surfing since they learned how to swim. Body surfing, or riding waves using only your body, has likely been around for as long as humans. Surfing on a board is a much more recent development, beginning in Polynesia prior to anyone setting foot on the Hawaiian Islands.

In Polynesian culture, surfing was done mostly by the chiefs and people in power. They had the best boards, and were allowed on the nicest beaches with the best waves. The lower class also surfed, but only at specific beaches. They could move up in status if they were excellent surfers. Surfing in Polynesia predates any European contact, and it was first described in 1769 by Joseph Banks on the HMS Endeavor (reference). Europeans also recorded watching Samoans surf on planks and pieces of canoes.

In Peru, the totora reed plant has been used for many hundreds of years as the main construction material for small boats. It is thought that this plant has also been used to make pre-surfboard like vessels for riding the waves. This particular plant is traditionally used in many areas of Peruvian life; as a patrimonial item, also used in boating, fishing, and folk art. This shows that not only is the plant itself extremely important to the Peruvian people, but so is surfing. It is thought that surfing was done here separate from any influence by outsiders, as it predates any known European contact.

For the Hawaiians, surfing was not a hobby, sport or recreational activity. It was deeply rooted in their culture, and seen as a form of art. The art itself, known as he’e nalu, encompassed more than surfing alone. It began before entering the water, while people prayed to the gods asking for protection and guidance while in the ocean. They also asked for big waves from the gods, and another part of the art of he’e nalu was actually constructing surfboards.
Like the Polynesians, Hawaiians first saw surfing as something mainly done by the upper class. Building surfboards was also a tedious and handcrafted process. Trees were carefully selected among three types, the koa, “ulu, and wiliwili. Craftsmen were handpicked, and 3 different types of boards were made based on width, thickness and length. The longest boards were the most difficult to master. The best surfers were often the upper class, as not only did they get the best built boards, but they were also given more time to practice, and the freedom to do so at the best beaches.

As most would guess, surfing in North America started in California by 3 Hawaiian princes. In 1885 the three princes surfed the mouth of the San Lorenzo River on boards made from redwood trees. In 1907, George Freeth came to California from Hawaii to demonstrate surfing for the opening of the LA-Redondo-Huntington railroad. He started his demonstrations at the Huntington Beach Pier, and then moved up and down the coast, surfing and showing off his life guard skills.
On the east coast, surfing began in 1912, only about 100 years ago, when James Matthias Jordan, Jr. rode the waves at Virginia Beach on a Hawaiian redwood board given to him by his uncle. He named the board “Big Jim” and turned what was once a cultural tradition, into what is now a hobby, sport, and recreational past time of many.

Like in North America, surfing in Australia originated in Hawaii. Tommy Walker brought surfing to Australia in 1910 in Sydney. The board he rode was from Hawaii, a 10 foot board that he purchased for a mere $2. He quickly became an expert on the waves, and began giving demonstrations all over Sydney.
Surfing quickly became popular in Australia, given the many beaches and excellent waves. In 1914 surfing gained national exposure when the Hawaiian Duke Kahanamoku, who was traveling the world as an Olympic sprinter, put on demonstrations at different Sydney beaches. In 1915, he made surfing even more popular when he showed his skills at Freshwater, Manly, Dee Why, and Cronulla beaches (reference).
Today, in many areas of the world, wherever there are beaches, there is surfing. The best surfing is typically in the Pacific Ocean, where the waves crest high and do so often. In other areas many people body surf on smaller waves and learn how to stand up surf where the waves are a bit gentler. At Camp Live Oak, you can do both, with skilled instructors guiding you along the way.