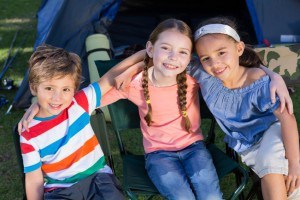 Summer camp, although possibly not seen as life altering, can positively impact a young person for years down the road. It is difficult to know for sure if today’s firefighters, police officers, nurses, or military members chose their profession based on childhood circumstances. Or if they were born with a helping personality. Maybe it’s a little bit of both. But regardless, most people who attended summer camp as a kid, has a story or two to share, a long-time friend that was made, or a belief that their time spent there changed them as a person.
When most people think of summer camps for kids, they think of the woods, fun, and freedom (for parents anyway). Visions of children swimming, hiking, and sitting around the campfire are common. But what about the things you can’t see? The things that kids learn at summer and day camps.

Feeling Uncomfortable
Especially when it is a child’s first time at a camp, they are very likely to feel uncomfortable. Their parents have left them with a bunch of complete strangers, kids and adults, and the whole environment is new and foreign. At first, they have no friends, and have to step out of their comfort zone for the simplest things. “Who do I sit with to eat? Where are the bathrooms?” Etc etc. For some children, being outgoing and asking questions is easy, but for many it’s not. Attending camp forces all kids to step up and lean only on themselves, if only for a short time.

Social Interaction
Once a child has gotten the hang of being at camp, or has attended a few times, he or she likely no longer feels uncomfortable, but may still need to learn how to interact with others in a socially acceptable manner. Of course, school teaches children a lot of this, but in a very structured and rule-specific way. At camp, kids are given a bit more freedom, and are also more physical. Camp can teach kids how to be gentle with others, keep them safe from harm (whether that be from others or themselves) and use appropriate volume when speaking (both inside and out). These more active, faster paced environments can be new to many kids, and what they learn during them can transfer to their time at school and also playing sports.

Camaraderie
Often the teams and groups that kids, especially young kids, are on are fabricated and picked by adults who teach or coach them. We don’t want anyone in gym class to be left out, so teachers divide the class. Sports teams are mainly based on skill, not whether or not the children in them are friends. And that is all ok, we all need to learn to work with people we don’t necessarily like, or are indifferent about. At summer camps, kids often make new friends, and in turn spend more time with those friends during camp than they do anyone else. They also can feel as though all of the campers are their friends. They have all shared a similar experience together, that kids at school or on their teams have not. This feeling of camaraderie is not always felt in other situations. It can thought of like members of the military; you may not know marine who lives two houses down, but if you are one, you automatically feel a sense of closeness. A feeling that you’ve both been through the same things, that you both understand one another’s past. This can work the same way for kids who went to camp together.
These are just a few of the more important emotional and mental skills a child can learn when attending summer camps. We’ve gone over some of the other benefits in previous blogs, but these seem less known, but nonetheless important!